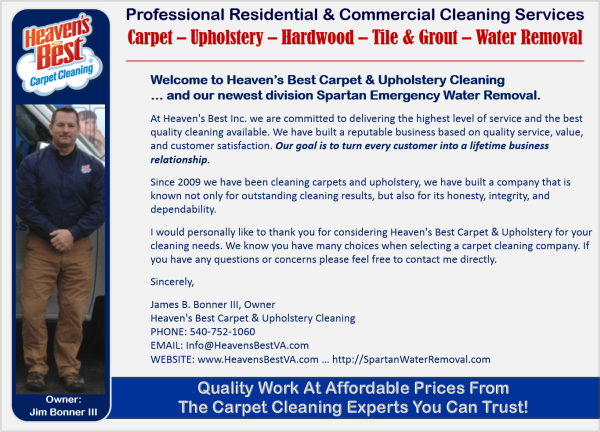 Owner James B. Bonner III is a 1985 graduate of West Chester University. Upon graduation, James was commissioned as a second lieutenant in the United States Marine Corps where he served for eight years. In 1993 at the rank of captain, James was honorably discharged from the USMC. In 1994 he applied and was accepted into the Federal Bureau of Investigation as a Special Agent. James held various positions at the FBI from Case Agent, SWAT Team Commander, and Supervisory Special Agent. After 23 years of dedicated government service, James decided to pursue his dream of owning his own business.

Jim and his team of skilled (IICRC certified) professionals are committed to delivering the highest level of service, and the best quality cleaning available. IICRC (The Institute of Inspection, Cleaning, and Restoration Certification) sets the world-wide standard for carpet cleaning and certification. Jim and his team are re-certified yearly.